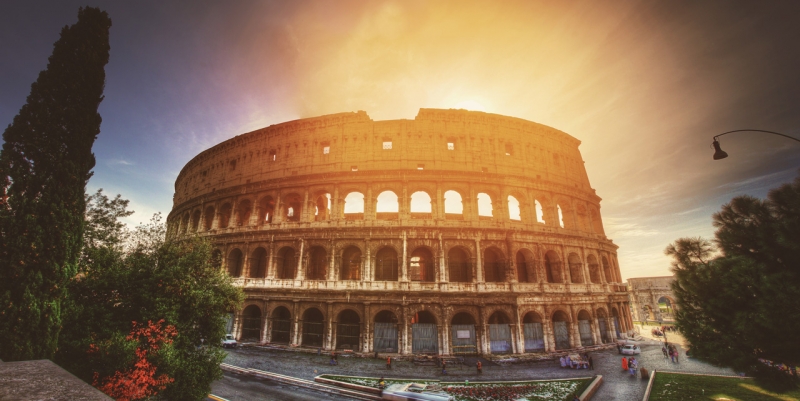 Rome is the city with the highest concentration of historical and architectural riches in the world, the heart of Catholic Christianity and is the only city in the world to host an entire foreign state within its confines, the enclave of the Vatican City.Over 16% of the world’s cultural treasures are located in Rome. Its historical center houses nearly three thousand years of antiquity. The Holy See’s property beyond the confines of the Vatican State as well as the Basilica of St. Paul outside the Walls are on the UNESCO’s World Heritage List.

It is also a city of symbols. In addition to the municipal emblem, there is the Capitoline wolf, the bronze statue depicting the legendary she-wolf suckling the twins Romulus and Remus; the Coliseum, ancient Rome’s largest amphitheatre and one of the seven wonders of the modern world; the dome of St. Peter’s Basilica in the Vatican, dominating the entire city and symbolizing Christianity.

Rome has also been a significant city for sports. It will be hosting the Olympic games in 2020. Rome has also been the venue for the finals of two footballs World Cups, hosted the XIII World Swimming Championships and has on three occasions been the final stage of the Giro d’Italia. It has also been the one of the sites of the games of the NBA Europe Live Tour. Every year in spring the Rome Marathon is run here, which is rated by a number of running magazines to be the top city marathon in the world.

No trip to Rome would be complete without a trip to the ten Vatican Museums, the most significant one being the exquisite Sistine Chapel. The Vatican Museums are also open on the last Sunday of every month when admission is free.

Find a hotel in Rome, Italy
Tweet
Published in Europe

Things To Do Near Rome, Italy

More in this category: « Florence, Italy Venice, Italy »
back to top